Since version 10, Postgres can be configured with ICU, the reference library for Unicode, to use its collations in COLLATE clauses.

To that end, ICU collations for most language/countries pairs are automatically created at initdb time (they will be found in pg_catalog.pg_collation), and others can be added later with CREATE COLLATION.

Once our Postgres instances are linked with ICU (most are because the major packagers like Apt, Rpm, or the Edb Installer have opted to include it), why not try to benefit from all these services through SQL?

This is the goal of icu_ext, a C extension providing SQL wrapper functions to ICU. As of now, it brings about twenty functions allowing to inspect locales and collations, identify text boundaries, compare and sort strings, spoof-check strings, spell numbers, transliterate between scripts.

Before looking into compare and sort functions, let’s recall what the ICU integration already provides.

Benefits of ICU versus collations from the OS

What Postgres can’t do yet with ICU collations

Unfortunately there is a problem preventing to use the advanced comparisons to their full potential: the current infrastructure in Postgres for text comparisons cannot handle strings being equal when they are not equivalent byte-for-byte. To enforce this constraint, when strings compare as equal with the linguistic comparison (strcoll-like), Postgres runs an strcmp tie-breaker on them, and discards the result of the ICU collator (or libc’s, for that matter) in favor of that bytewise comparison.

ks-level1 here means primary collation strength. Be warned that this syntax with parameters as BCP-47 tags is silently ineffective with older versions of ICU (53 or older). When unsure of the syntax, you may pass it to icu_collation_attributes() to check how ICU parses it, as shown a bit below in this post. icu_version() also

Anyway, there are five levels of strength, the primary level considering only the base characters so that case and accent differences are ignored.

The point with the strcmp tie-breaker is that the following equality will not be satisfied, contrary to what we might expect if we were not aware of it:

Hopefully we’ll get the ability to make these case-insensitive-and-more collations work seamlessly in a future version of Postgres, but in the meantime, it’s possible to somehow circumvent this problem with functions from icu_ext. Let’s see how.

Comparing strings with functions from icu_ext

It returns the result of ucol_strcoll[UTF8](), comparing string1 and string2 with collator as the ICU collation. It’s a signed integer, negative if string1 < string2, zero if string = string2, and positive if string1 > string2.

When the 3rd argument collator is present, it’s not the name of a db collation declared with CREATE COLLATION, but the value that would be passed as its locale or lc_collate parameter if we had to instantiate that collation. In other words, it’s a locale ID from the point of view of ICU independantly of Postgres (yes, ICU uses the term “ID” to denote a string argument that is more less a built-up string)

When the collator argument is missing, it is the collation associated to string1 and string2 that is used for the comparison. It must be an ICU collation and it must be the same for the two arguments or the function will error out. This form with a single argument is significantly faster due to Postgres keeping its collations “open” (in the sense of ucol_open()/ucol_close()) for the duration of the session, whereas the other form with the explicit collator argument does open and close the ICU collation at each call.

To get back at the previous example, this time we can witness the equality of strings under the regime of case & accent insensitiveness:

With an implicit Postgres collation:

The two decomposed forms, NFD or NFKD are infrequently used in UTF-8 documents, but they’re perfectly valid and accepted by Postgres. Semantically, 'à' is supposedly equivalent to E'a\u0300'. At least, ICU collators seem to see them as equal, even under the strictest comparison level:

(again, the Postgres equal operator disagrees because of the tie-breaker. The point of using functions as an alternative is precisely to bypass it).

Besides, combining characters are not only about accents, since some of them achieve text effects such as strikethrough or underlines. Let’s see an example from within psql, as displayed on a gnome terminal. The query in the screenshot below takes the literal ‘Hello’, inserts combining marks from U+0330 to U+0338 after every character, returning the result and comparing it with the original string with primary and secondary comparison strengths. 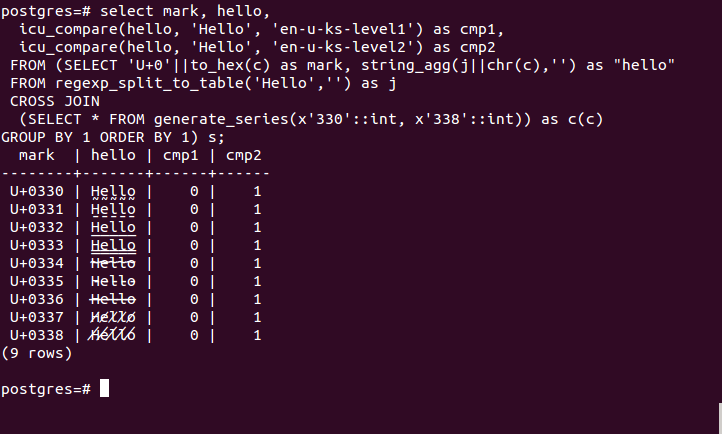 The ORDER BY and GROUP BY clauses are not designed to work with functions comparing two arguments, but they do work with single-argument functions that transform their input into something else. To sort or group results according to all ICU advanced linguistic rules, icu_ext exposes a function that converts a single string into a sort key:

The ICU documentation warns that computing a sort key is slow, much slower than doing a single comparison with the same collation. But in the context of ORDER BY in queries an to the extent of my tests, they seem to do quite well.

In fact when looking at the performance of ORDER BY field COLLATE "icu-coll" versus ORDER BY icu_sort_key(field, 'collation'), most of the difference appears to be caused by icu_sort_key having to parse the collation specification for each call, especially for complex specifications.

Just like for icu_compare(), to benefit from Postgres caching collator objects for the duration of the session, it’s recommended to use the single-argument form, which relies on the collation of the argument, for instance, with our “fr-ci” collation declared previously:

Still on performance, here’s a comparison of EXPLAIN ANALYZE for sorting 6.6 million short words (13 characters on average) with icu_sort_key versus ORDER BY directly on the field:

We can see here that there’s no notable performance degradation when calling icu_sort_key explicitly. In fact in this example it’s slightly faster for some reason.

GROUP BY or DISTINCT ON can use sort keys, too:

The ordered position or unicity of a piece of text under a certain collation is equivalent to the ordered position or unicity of its binary sort key computed with that collation. So it’s possible to create an index, including to enforce a unique constraint, on icu_sort_key(column) or icu_sort_key(column, collator) rather than just column to work around the “non-binary-equal is not equal” rule for ICU collations.

Using the previous example of with the books table, we could do:

and then getting it used for exact matches with

Just to check that our index is effectively used:

As mentioned above, when refering to a collation, old and new versions of ICU don’t necessarily understand the same syntax and tags, and they also tend to ignore anything they can’t parse instead of reporting an error.

To make sure that a collation is correctly spelled or does what you expect, the output of icu_collation_attributes() can be examined. This function takes a collation name as input, collects its properties, and returns them as a set of (attribute, value) couples with the display name (probably the most important attribute), plus tags such as kn/kb/kk/ka/ks/kf/kc, and finally the version of the collation.

Besides comparisons and sort keys, icu_ext brings SQL wrappers to a bunch of other ICU functionalities (see the README.md in the sources for at least one example per function):

Hopefully other functions will be added into icu_ext, as time permits, and more examples on how to use the existing ones. In the meantime, feel free to submit issues or pull requests on github if some functions don’t do what you expect, or if you’d like specific ICU services being exposed and with what interface, or exposed differently than what icu_ext does at the moment…